Commission: Commissioned by the Vienna Soloists 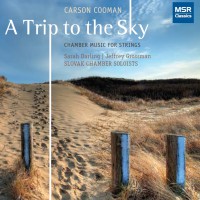 Viola Quintet (Unquiet Parables) (2009) was commissioned by the Vienna Soloists and is dedicated to Jack Melby and Jane Thompson.

The work is in three movements, each sharing the same basic musical material. The starting point for the music is dissonant cadential figuration centered on Ab (taken from the voice leading of American colonial-era music). Spinning out from this idea, the material extends to incorporate a sonority formed from perfect 5ths one semitone apart. Irregular phrase lengths and cadences are used as the basis of the work’s large-scale structures.

The first movement, Recitatives and Chorales, consists of free, recitative-like material for the instruments in solo. These recitatives often erupt into fast spirals. This texture is interrupted periodically by chorale-like ideas presented by the full quintet.

The second movement, Serenata, is a song-like with each instrument taking the melody in turn. Some of the recitative-ideas of the first movement re-emerge, as well as a re-articulation of the cadential figuration.

The third movement, Ductia, is energetic and driving. A ductia is a Medieval stamping dance resembling the estampie. The driving (yet sometimes off-kilter) character of the dance is interrupted by a recollection of the first movement’s material. The final resolution of the extended cadential figurations occurs at the end, and the work ends exuberantly with a flourish in Ab major.