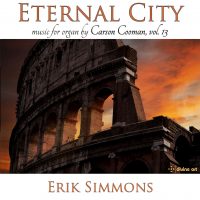 Recorded on Eternal City: Music for Organ by Carson Cooman (2020)

Trilogy on B-A-C-H (2017) for organ was written for and is dedicated to Rhonda Sider Edgington. The musical material for the work is a four note theme: the letters B-A-C-H (the last name of Johann Sebastian Bach) treated as a musical motive: B-flat, A, C, B-natural (“H” in German note naming). Starting with Bach himself, this theme has been used by a truly enormous number of composers over the centuries.

Most B-A-C-H themed works (at least those for organ), tend to be extremely contrapuntal, likely taking their cue from much of Bach’s own organ music. However, I have very explicitly gone in the other direction and use the theme primarily motivically/melodically and as a generating force for the kind of mixed modality that is typical of my music.

The first movement is an energetic march. The second movement is a lyric meditation containing both an arioso and a short quasi-passacaglia, in which the B-A-C-H motive repeats slowly in the pedals. The last movement is a free fantasia: the motive appears both in chorale-like long notes and as a fast, turning figure.