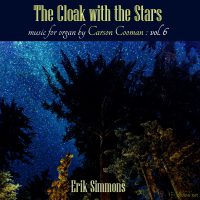 Recorded on The Cloak with the Stars: Music for Organ by Carson Cooman (2017)

Three St. Francis Legends (2017) are dedicated to Andreas Willscher. They are inspired by stories about St. Francis of Assisi as told in the Fioretti di San Francesco.

1. St. Francis Divests Himself of All Worldly Wealth: Francis was born into a prosperous merchant family and lived a high-spirited and hedonistic young life. A serious illness led him to a spiritual crisis that caused him to divest himself of all of his worldly wealth and to live a life of poverty. The music is a chorale: repeating and gradually divesting itself of rich harmony and volume to a quiet, simple end.

2. St. Francis and the Sermon to the Birds: Francis came across a flock of birds who did not fly away as he approached them. Francis then preached a sermon to them as they listened carefully. The birds flew away only after receiving his blessing. The music is a passacaglia: the steady, exhorting words of Francis are joined by the sounds of the birds, who fly away at the very end.

3. St. Francis and the Wolf of Gubbio: A fierce wolf terrorized the villagers and livestock of the town of Gubbio, Italy; eventually fear of the wolf caused the villagers to remain inside the town walls. Francis met the wolf, commanded it in the name of God to cease its attacks, and made peace with it-an agreement that it would no longer terrorize the town, and in return would be fed. The wolf lived several more years. The story says that when it died, the people of Gubbio built the Church of St. Francis of the Peace on the site of the wolf’s grave. The music is a rondino (small rondo). The wolf’s music alternates in discussion with Francis’s music. In the final section, the wolf’s music has been transformed, and Gubbio’s bells ring out in the brief coda.