The Revelations of Divine Love (Metaphors from Sea and Sky) (2009)

Dedication: for Rupert Gough and the Choir of Royal Holloway, University of London

Commission: Commissioned by the Choir of Royal Holloway, University of London 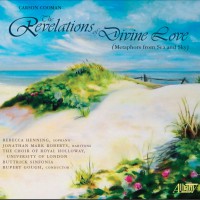 The Revelations of Divine Love (Metaphors from Sea and Sky) (2009), an oratorio for soprano, baritone, chorus, and chamber orchestra, was commissioned for and is dedicated to the choir of Royal Holloway, University of London and Rupert Gough, director of choral music.

The texts of the work are adapted primarily from the writings of Julian of Norwich (c. 1342–1416). Julian is best-known for her Sixteen Revelations of Divine Love (c. 1393), believed to be the first English-language book written by a woman. Considered one of the most significant English mystics of all time, Julian lived a reclusive life as an anchoress at the Church of St. Julian in Norwich, England (her true name is unknown). Regarded even during her lifetime as a spiritual authority, her optimistic visions have been very influential in the years that have followed.

Texts are also drawn from three additional sources: an excerpt from the Book of Margery Kempe (translated by Christopher M. Brunelle), two poems by English poet Robert Herrick (1591–1674), and a poem by the American writer Elizabeth Kirschner (b. 1955).

The primary concept underlying this oratorio is the presence of two distinct discourses. One is a sequence taken from Julian’s religious visions. The other is a “sonic geography” of Nantucket Island (located 30 miles off the coast of Massachusetts in the United States). This interconnected concept was inspired by the writings of the great Scottish poet George Mackay Brown (1921–1996). Living his entire life on Scotland’s Orkney Islands, Mackay Brown consistently explored the “transposition” of religious imagery and events to his native landscape. (For example, the poem Apple-Basket, Apple-Blossom takes the story and structure of the Stations of the Cross, and maps them onto imagery of distinctly Orcadian character.) 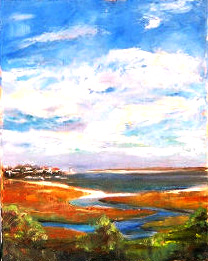 The landscape of Nantucket Island has been the driving force behind a large number of my compositions for many years. In this oratorio, Julian’s visions are transposed from Norwich and mapped onto the Nantucket landscape. Each movement of the work thus has two parallel purposes: a setting of the visionary words, and a portrayal of a specific place in Nantucket’s geography. Much of the music was planned in the actual locations. Since the soloists and choir must, by necessity, sing the words, a great deal of the landscape is left to the orchestra. Thus, the orchestra’s role is substantially greater than simply accompaniment.

Because of these two discourses, the oratorio is not intended as comprehensive “working out” of all aspects of Julian’s visions, nor does it use her own structure and sequence. Rather, it takes her beautiful words, and the fundamentals of her visions, and attempts to create a new narrative and spiritual experience from them.

The music begins with I. Sinfonia I, set at Brant Point, one of Nantucket’s three lighthouses, appearing at the place of entry into the harbor.

These next three movements form the first section of the work, focusing on “biographical” elements. They are set at Nantucket’s harbor mouth, a point of entry and discovery.

II. Prologue sets an excerpt from The Book of Margery Kempe (1438). In this section of her autobiography, Kempe visits Julian in Norwich to seek counsel regarding spiritual visions Kempe had recently experienced. This text is sung in Latin, representing a transitional entry point into the modern English of the remainder of the work—much in the manner of entering the harbor.

Modern English:
And then she was bidden by our Lord to go to an anchoress in that same city [Norwich] named Dame Julian. And so she did and was shown the grace that God put in her soul of compunction, contrition, sweetness, and devotion, compassion with holy meditation and high contemplation, and very many holy speeches and fellowships that our Lord spoke to her soul and many wonderful revelations which she showed to the anchoress. The anchoress was expert in such things and could give good counsel. The anchoress, hearing the marvelous goodness of our Lord, highly thanked God with all her heart for this visit. 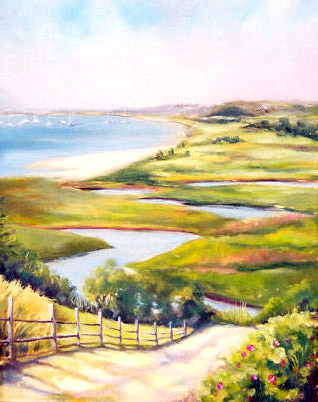 In III. Invocation: Three Petitions, Julian tells how she asked for three gifts of God, all of which were necessary prerequisites for her visions.

These revelations were shown to but a simple creature, who desired three gifts from God.
Firstly: a perception most vivid of his Passion.
Secondly: bodily sickness at but thirty years of age.
Thirdly: to have of God three wounds: true contrition, kind compassion, and willful longing for God.

IV. To Ever-loving God sets a poem by Robert Herrick describing the soul’s longing for flight. (The two Herrick poems used in this piece represent the “sky” and “sea”, respectively.)

Thou bidst me come; I cannot come; for why,
Thou dwel’st aloft, and I want wings to flie.
To mount my Soule, she must have pineons given;
For, ’tis no easie way from Earth to Heaven.

V. The Blood from the Garland is a dramatic depiction of one of Julian’s visions. The imagery which Julian employs throughout her writing is extremely tactile (and often sensual) in its impact; in this case, she experienced the physicality of the blood very directly. This movement is set at Coatue, a spit of uninhabited land that separates the outer harbor from Nantucket Sound. In particular, the setting here is the far side of Coatue, looking out to the dark, rough waters of the Sound.

Now at once I saw red blood trickling down from the garland.

Hot and freely it fell, as if it had just been pressed down upon his blessed head,
who is both truly God and man, the very same that suffered thus for me.

In that moment, I knew clearly that it was he himself.

In VI. Prayer, we walk back across the dunes to the calm side of Coatue, looking into the upper harbor. The text is one of Julian’s most beautiful prayers: a serenely simple reflection of all-encompassing God.

God of your goodness, give yourself to me.
For you are enough for me:
Only in you do I have everything. Amen. 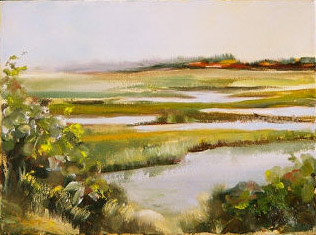 VII. God in All Things is set at Polpis, within the lower harbor—in particular, the quiet, marshy inlets off of the harbor’s waters. The music is devotional in character.
For since all things have their start in God’s making, so all that is done belongs to God’s doing.

VIII. The Fiend sets the most violent vision in Julian’s writings; while sick unto death, she is visited and tormented by the Devil. This movement is set at Surfside, on Nantucket’s South Shore: violent waves and a largely desolate landscape.

It seemed that the Fiend was at my throat.

His face was red like newly-fired tiles, with black spots like stains, fouler than the tiles themselves. He grinned at me. With his paws, he gripped me by the throat.

And all during that time I trusted that I would be saved by the mercy of God.

Immediately after the Devil leaves her, Julian is shown a beautiful vision of “the city of the soul in the middle of the heart.” In this music (IX. The Middle of the Heart), we move to Madaket—though the violent ocean landscape remains nearby, its character is tempered by the glorious, legendary sunsets—serenely vibrant experiences.

And then our Lord opened my eyes and showed me my soul in the middle of the heart.
I saw the soul as large as if it were an endless world and a holy and blissful kingdom.

We travel very far up into the inner harbor for two visions: the ebullient X. Three Heavens and the hushed XI. All Shall Be Well (which sets some of Julian’s most famous words). Here, the two faces of Wauwinet are explored as an archetype for the seasonal character of much of the rest of Nantucket. The summer landscape is energetic and dance-like; the winter landscape is quiet and serene.

I was shown three heavens in these words he spoke:

For joy, I understood the Father’s good pleasure.
For happiness, the honor given the Son.
For endless liking, the Holy Spirit.

XII. Secrets is set at Altar Rock, a post-glacial rock formation, located inland at the top of a hill. Whether or not it served (as some legends tell) as a place of meeting for American Indian religious ceremonies, it has come to represent a place of natural spirituality that does not give up all its secrets. Julian tells of God’s two kinds of secrets: those revealed to us now and those that are hidden until a future time.

Our Lord showed two kinds of secrets: one is the great secret with all the hidden details belonging to it, and these kinds of secrets he wants us to know are hidden until the time comes.

The other are secrets he opens and makes known to us; and these, it is his will that we know. 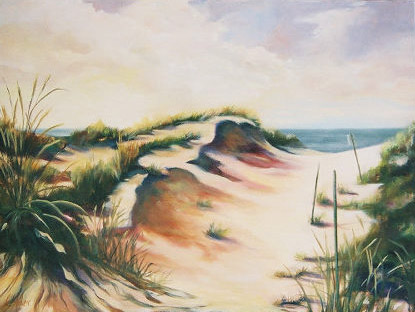 XIII. The Path to Grace takes us on the road to Sankaty Head, another of the island’s lighthouses. The sentiment of the text—“we are often dead, according to the judgment of this world; yet in the sight of God, the soul that shall be saved was never dead”—depicts well the sense of Sankaty Bluff. Its continual erosion by the sea presents a significant ongoing problem for the island residents who, despite the death of the land, are committed to the life of that place.

In this mortal life, mercy and forgiveness make the path that leads us steadily to grace. And because the tempest of sorrow falls across our way, we are often dead, according to the judgment of this world; yet in the sight of God, the soul that shall be saved was never dead. Nor shall it ever be.

XIV. Eternitie is the second poem by Robert Herrick, this time representing the sea. Because of its height, Sankaty Bluff’s view of the ocean is one of the island’s most beautiful, showing well the sense of “vast Eternitie” that is the endless sea.

O Yeares! And Age! Farewell:
Behold I go,
Where I do know
Infinitie to dwell.

And these mine eyes shall see
All times, how they
Are lost i’th’Sea
Of vast Eternitie.

Where never moon shall sway
The Starres; but she,
And night, shall be.
Drown’d in one endlesse Day.

XV. Endless Love is a simple, folk-like duet for the two soloists and is set at Hummock Pond: a place whose waters are still and fresh, largely untroubled by the vagaries of the nearby ocean surf.

XVI. It Is I is set at Miacomet Beach, a place whose night landscape imparts a sense of rooted power. Julian hears the voice of God, and the music adopts the character of a French Baroque overture.

XVII. Sinfonia II is set in the Coskata Wildlife Refuge, which is an appropriate place, before the finale, to pause for prayerful reflection. 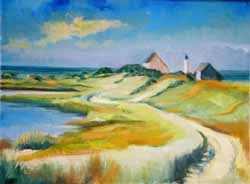 In the final movement, XVIII. In the Wake of Making, a poem by Elizabeth Kirschner finally makes the narrative of sea and sky explicit in the sung text—drawing together both the religious and natural visions. For this finale, we stand at Great Point, the third and final of the island’s lighthouses. It is located at the island’s very tip, amidst nothing but the coming of morning: sea, sky, and a final piercing beam into the departing night.

Dawn,
slow hush
breathing inside.
Long breath,
vast breath—
stillness at its
melting point.
Who cradles
the light?
Who sculptures
the waves?
Bliss of listening to
rustle of seashell,
arias of air
and flurrying wings.
Glory of morning:
now is the time
to be broken
awake—alive!
Now is the time
to cup the sun.
Allure of mist
cleanses sea-foam,
an ever-loving tapestry.
All shall be well.

(All the paintings of Nantucket Island on this page are by Loretta Yoder and used with permisssion.)