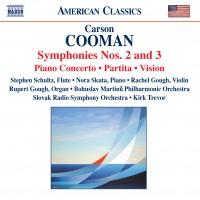 Symphony No. 3, “Ave Maris Stella” (2005) was written for the Duquesne Contemporary Ensemble and is dedicated to composer David Stock. Throughout his career, Stock has been a tireless and generous advocate on behalf of new music and living composers. This work is dedicated to him in tribute—as both an important American composer and a significant contributor to America’s contemporary musical life.

The work’s basic source material is the plainchant Ave maris stella (“Hail, star of the sea”)— appropriate because of Duquesne’s standing and history as a Catholic university. When the composition of this work first began, the original plan was for a celebratory and vibrant piece. As the planning progressed, however, personal circumstances intervened and began to change the work’s tone—becoming substantially bleaker and more obsessive.

The title of the first movement, Pentimento, is defined as “an underlying image in a painting, as an earlier painting, that shows through when the top layer of paint has become transparent with age.” The melodic and harmonic material for the movement is entirely drawn from the plainchant source, although it is completely transformed and covered up—as in a pentimento. At various points, one can begin to hear the original plainchant “peek out” in subtle ways. The opening section of the movement obsesses again and again on what sounds like a “beginning”— as though it is trying to begin again and again. After a brief bassoon cadenza, a fast and driving section starts, marked “sinister.” After driving through a series of transformations on the plainchant material, a bridge passage leads to further attempts at the “beginning” again. Finally, these attempts are given up, and the plainchant material (the underlying layer) begins to show through quietly—in preparation for the next movement.

In the second movement, Interrupted Motet, the plainchant theme is used in a more straightforward fashion. After the opening declamatory statements, the following sections move between more free developmental techniques, based on the first movement’s transformations, and “motet” sections—using cantus firmus methods and textures from Renaissance music. The tone and palate is, however, much darker and more obsessive. There is a brooding ponderousness to these contrapuntal developments. The final motet section ends in a rageful shout, the plainchant material is presented again in full force, and the pent-up energy dissipates to the close.