for Tuba and Piano

Commission: Commissioned by Mark Nelson for the Southwest Regional Tuba and Euphonium Conference 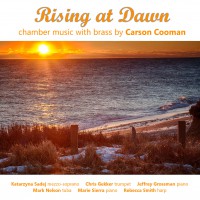 Recorded on Rising at Dawn: Chamber Music with Brass by Carson Cooman (2013)

Sonata for Tuba and Piano (2007) was commissioned by and is dedicated to tubist Mark Nelson for premiere at the 2007 Southwest Tuba and Euphonium Conference. The work is in three movements, each using the same basic musical material. Throughout the work, there is an integration of the total chromatic spectrum (represented through row-like constructions) with triadic and tonal elements, particularly connected to the interval of a minor third.

The first movement, Speaking of Sunsets, is bold and dramatic throughout.  The musical material is subjected to a series of circular paths that loop back on themselves until the movement ends. (The title refers to American poet James Tate’s poem Never Again the Same and also Charles Wuorinen’s musical setting of that text.)

The second movement, Build Me a Garden, takes its title from an original song I overheard while planning this work. It sung by a homeless man who was then sitting on the banks of the Charles River in Boston, Massachusetts. His song (bearing both textual and musical resemblance to various folk songs and African-American spirituals) spoke of hopes and dreams:

The movement opens with a slightly modified version of the song, which is developed over the course of the movement. Connections are made between the first movement’s material and the pentatonic melody (with its opening intervals of minor thirds).

The third movement, Rising at Dawn, is a moto perpetuo. The ideas from both previous movements are put together in new, dancing combinations. Coming out of the darker first two movements, this movement continually seeks places of joy. The dance breaks down, and a recollection of the first movement leads to a bright coda.