for Trumpet and Organ

Dedication: Commissioned by the American Guild of Organists for the 2014 Biennial National Convention in Boston, Massachusetts

Commission: Commissioned by the American Guild of Organists 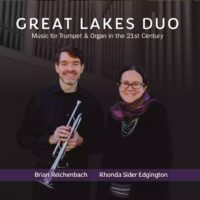 Recorded on Great Lakes Duo: Music for Trumpet and Organ in the 21st Century (2021)

Solstice Sonata (2013) for trumpet and organ was commissioned by the American Guild of Organists for its 2014 Biennial National Convention in Boston, Massachusetts. It was premiered on June 24, 2014 at the Memorial Church, Harvard University, by trumpeter Chris Gekker and organist Christian Lane.

At the solstice (summer in the Northern Hemisphere and winter in the Southern), the sun is directly aligned with the tropical latitude lines, and the longest day of the year occurs (marking the start of summer). This sonata is music of celebration and contemplation, taking the inspiration of the longest day as a starting place for both meditation both thoughtful and joyous. ”Take Flight” soars and leaps with vigor—perhaps the image of a hang-glider’s journey over a dramatic landscape under the late evening sun. “The Dream of Peace” is lyrical and passionate; it is perhaps night music of reflection and intensity. “Glittering, Aglow” begins with quiet, mystical music: a gradual awakening. A vibrant, syncopated dance breaks out, is interrupted by the quiet music again, and returns to push forward to a vibrant conclusion. The new season has begun.