Dedication: in memory of the lives claimed by the sea 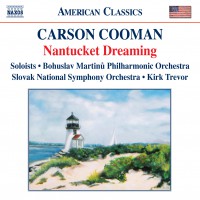 Sankaty Dreaming (String Quartet No. 4) (2002) was written in memory of all those whose lives have been claimed by the sea.

The title of the work refers to Sankaty Bluff, on Nantucket Island, Massachusetts. Atop the bluff sits one of the island’s three lighthouses. The lighthouse was of crucial importance to ships traveling by the island to warn of the dangerous shoals. In recent years, the bluff itself has suffered severe erosion from the sea with homes on it needing to be moved or taken down. Behind the bluff lies a landscape of much lower altitude—thus when the bluff eventually erodes fully, the entire landscape of the island will change when the sea “claims” back a huge amount of land.

It is this imagery and inspiration which drives this work in two movements.

The first movement, Capriccio, opens with a hammered chord which serves as the basis for much of the musical material of the work. In a sense, this returning rhythmic figuration represents the lighthouse’s flashing beam, piercing a rough ocean landscape.

The second movement, Elegy and Arias, is calm and reposed. There is sadness and darkness—an ocean landscape at night. At the end, the first movement’s opening hammer-chord returns, although this time it is as a more distant, bell-like foghorn. Under it, one last aria is sung as the work fades to silence.