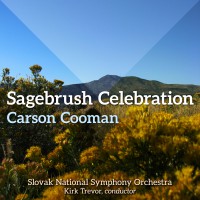 Sagebrush Celebration (2014) for orchestra was commissioned by the Carson City Symphony, David Bugli, music director, in celebration of its 30th anniversary. The work also commemorates the 150th anniversary of the state of Nevada.

Sagebrush was designated Nevada’s state flower in 1917. This work is a festival fanfare-overture, with a rugged character that celebrates Nevada’s frontier past. The main theme of the work is derived from the name “Carson City” spelled out in musical note codes (assigning each letter of the alphabet to a musical pitch.)