Text adapted from the Bible by Matthew Burt 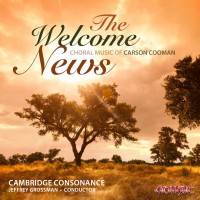 Recorded on The Welcome News: Choral Music of Carson Cooman (2012)

O Lord, I Will Sing of Your Love Forever (2010) for SATB choir unaccompanied was commissioned by King’s Chapel, Boston, Massachusetts, in celebration of its 325th anniversary. The work was premiered on January 23, 2011 by the King’s Chapel Choir under the direction of Heinrich Christensen.

The commission specified a new work celebrating the history and heritage of King’s Chapel. During the 2010–11 anniversary year, the King’s Chapel Choir was performing coronation anthems by Handel and Purcell; Heinrich Christensen thus suggested the idea of writing a new, contemporary “coronation anthem.”

Much like the traditional English coronation anthems, the text for this work is assembled and adapted from the Bible. I asked my frequent collaborator Matthew Burt to put together a text that would reflect both the coronation anthem tradition and a contemporary perspective on kingship. This seemed especially appropriate for King’s Chapel not only in the light of its Unitarian revision of the Book of Common Prayer in 1785, but also in reference to the American republic founded after the revolution with which the Chapel shares such strong historic ties.

The anthem begins grandly with words from Psalm 89 celebrating God’s all-encompassing faithfulness and love. An alleluia refrain follows and returns several times throughout the work. However, it is not a majestic, Handelian alleluia, but rather one of inward passion and fervent introspection. The next section begins joyously with the familiar prophesy from Zechariah; it is followed by several brief Gospel scenes from the life of Jesus. After another alleluia, words of blessing from Psalm 103 are set vigorously before the work closes with a final alleluia.

King’s Chapel is no stranger to creative adaptations of traditional coronation texts: Daniel Pinkham’s setting of Psalm 122 (composed in 1963 for the 275th anniversary of the Chapel) takes the text so memorably set by Purcell and Parry and edits it so as to remove all references to Jerusalem, as if the psalm refers to King’s Chapel itself! However, the text of this present anthem is not so much creative as it is representative of the predominant models of divine kingship in the Bible. God is mostly portrayed as a cosmic king who has a “throne in the heavens.” God’s work is generally done through the prophets and other ministers, not through some earthly monarch. And regardless of whether one adopts a Unitarian or Trinitarian theology, it is surely significant that although Jesus is honored with the salutation “Blessed is the King who comes in the name of the Lord” on Palm Sunday, at his trial just days later he testifies that “my kingdom is not of this world.” All this points towards a less exuberant setting of the present text in favor of one that recognizes with humility both the unworldly nature of God’s kingdom and our responsibility to be ministers of divine compassion and justice in the world.