for Organ (manuals only) 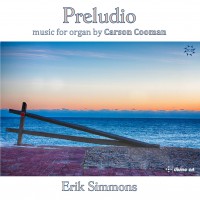 Recorded on Preludio: Music for Organ by Carson Cooman (2016)

Kleine Spielmusik (2015) is dedicated to Lothar Graap. The German word “spielmusik” alas does not have an elegant English language analogue (literally “play music.”) As the term has been used by many German composers from the early 20th century onwards, it tends to refer to music of a genial character that is (one hopes) enjoyable to play.