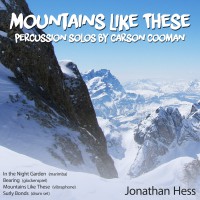 Recorded on Mountains Like These: Percussion Solos by Carson Cooman (2016)

In the Night Garden (2010), virelai for solo marimba, was commissioned by Richard Mason and written for and dedicated to percussionist Peter Jarvis.

1. an old French form of short poem, composed of short lines running on two rhymes and having two opening lines recurring at intervals.

3. a medieval song form providing a musical setting for a virelai but having a formal structure different from that of the poem.