for Solo Flute and Orchestra

Commission: Commissioned by Judith von Hopf for the Kiev Philharmonic 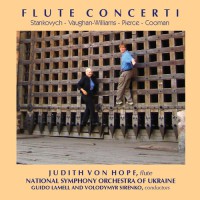 Flute Concerto (2006) was commissioned by flutist Judith von Hopf and the Kiev Philharmonic and premiered by them under the direction of Guido Lamell. The work is in two movements: Chanson and Fantasy Variations.

The first movement, Chanson, is an extended “song” that develops through a variety of textures. The opening song material is centered around G#. In turn, this G# is revealed to be a quasi-dominant of a D centered sonority. (A brief coda returns to G#, in preparation for the D center of the second movement.)

The second movement, Fantasy Variations, is cast as two presentations of the theme surrounding five free variations, plus a coda. The theme serves as the basis of the musical material for each variation as well as the structural template for each. Also, each variation contains material referring back specifically to the previous variation.