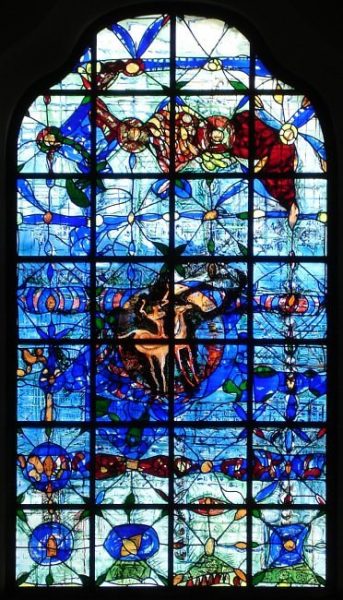 Fenestral Nocturnes (2020) was commissioned by organist Philip Hartmann to mark the 50th anniversary of the completion of the stained glass windows in the Pauluskirche in Ulm, Germany. The 16 dramatic windows were created by the German artist Klaus Arnold (1928–2009), professor at the art academy in Karlsruhe.

On the north wall are eight windows that run west to east and tell the story, in a highly stylized manner, of the life of the apostle Paul: from his conversion on the Damascus road to his martyrdom in Rome. On the south wall are eight windows that take symbols associated with Christ and unite them with visions of the end times and of the Eternal City (the heavenly Jerusalem). Arnold has thus taken the idea of Paul’s wider Christian mission as a transcendent idea for the total trajectory of the windows: moving beyond the specific details of his life towards the larger view.

The first idea for this composition came while recalling being alone in the quiet Pauluskirche on multiple evenings—with the setting sun and the windows illuminated by the evening light. In each nocturne, a window is explored musically, colored by a crepuscular mood. The music seeks to reflect the highly stylized approach that Klaus Arnold took to creating windows—they do not tell stories in any literal way like Biblical stained glass windows from earlier centuries. Rather they employ a 20th century postmodern approach: blending modernistic elements with traditional ones.