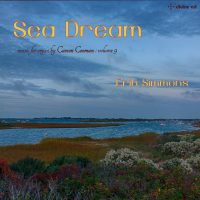 Recorded on Sea Dream: Music for Organ by Carson Cooman (2018)

Fantasy-Variations on Two Themes (2017) for organ was written for Heinrich Christensen in celebration of his significant 2017 birthday. The musical material for the work comprises two different themes. The first is a short melody by the Danish composer Carl Nielsen (1865–1931). (It was a sketch originally intended for inclusion in, but ultimately left out of, Nielsen’s late organ work “29 Little Preludes.”) This theme represents Heinrich’s native Denmark. The second theme is the American folk-gospel hymn “Angel Band.” This theme represents Heinrich’s adopted American homeland. It serves also as a remembrance of our dear mutual friend Harry Lyn Huff (1952–2016), for whom the tune was a particular favorite.

Both these themes are developed freely in a set of alternating “fantasy-variations.” The opening variation begins with a dramatic pedal solo before quoting both themes. The second variation is a lyric setting based on the Nielsen melody. The third is a jubilant hornpipe on “Angel Band.” The fourth is an aria on a transformation of the Nielsen melody. The fifth is a gigue-toccata on “Angel Band.” The sixth is an atmospheric contemplation: lush chords in the manuals move slowly and hint at “Angel Band” while the Nielsen melody is heard for the first time in its complete original form on a high pedal stop. The seventh and final variation begins with a brief evocation of the harmonies of the late Daniel Pinkham (a mentor to both Heinrich and me) before going on to return dramatically and jubilantly to the opening music, bringing together both themes again in a bold conclusion.