for Flute and Organ

Dedication: for Anna and Erik Meyer 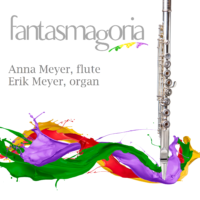 Epistle Sonata (2018) was commissioned by flutist Anna Meyer as part of a multi-composer project to bring about new repertoire for flute and organ. The work is dedicated to Anna and Erik Meyer.

The title comes from the chamber works written by W. A. Mozart for use in religious services in Salzburg; they were originally intended to be played after the reading of the Epistle. However, the music of my piece has nothing whatsoever to do with Mozart or the Salzburg mass. Instead, it takes the title as inspiration for a multi-section sonata that connects to the idea of the “epistle” itself: a letter (such as the Pauline ones in the New Testament) written with an intended group audience and structured with its own formal connections and logic.

After an opening invocation, the sonata travels through sections of varied character, all with a bright and optimistic tone. At the conclusion, the mood of an earlier section returns with even greater vibrancy before the closing flourishes.