Dedication: for Brigitte and Wolfgang Kraus 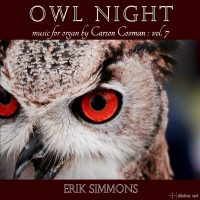 Recorded on Owl Night: Music for Organ by Carson Cooman (2018)

Concerto piccolo (in memoriam Eberhard Kraus) (2017) is titled in memory of the prolific German composer Eberhard Kraus (1931–2003). Like his father before him, Kraus was cathedral organist in Regensburg, Germany for many years. He was also a very active composer, teacher, editor of early music editions, recording artist (including the complete keyboard works of Handel), and touring recitalist (on both harpsichord and organ). As a composer, Kraus developed a personal blend of 12-tone technique with non-functional triadic harmony, resulting in a distinct and individual language that he used in nearly all his compositions. The resulting music possesses an intriguing blend of new and old, always presented with an economy of gesture and sense for maximum potential of the material’s development.

This work is dedicated to Kraus’s widow (Brigitte) and son (Wolfgang), also an organist. The music is based on the 12-tone row used in Kraus’s own Concerto piccolo für Orgelpositiv (1988), part of his series Concerti dodecaphonici. Although the source material is the same, my resulting piece is quite different due to a new musical structure, different emotional state, and my own approach to the set material. Kraus’s set is used in its prime form (Capriccio), inversion (Arietta), and retrograde (“Krebs”) plus retrograde inversion  (Chorale).