Dedication: for Rebecca Davy and Bruton Parish (Williamsburg, Virginia) in celebration of the dedication of Dobson Op. 96 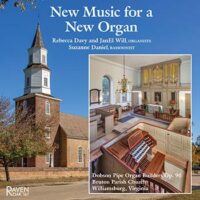 Concerto per organo (2019) is dedicated to Rebecca Davy and Bruton Parish (Williamsburg, Virginia) in celebration of the dedication of their new organ: Op. 96 from Dobson Pipe Organ Builders of Lake City, Iowa.

The style of this work pays homage to aspects of the neo-baroque style that flourished in Europe (especially Germany) in the early-mid 20th century. As part of the Orgelbewegung (Organ Reform Movement), a contemporary of understanding baroque and classical principles became significant not only in pipe organ design but also in music written for the organ. As with many things in history, the pendulum often swings too far in one direction or another. If the Orgelbewegung ideas at times went too far in their anti-romanticism, so too did the swing back against it beginning in the 1980s. Thankfully, here in the early 21st century, we are a time of great artistic eclecticism where inspiration can and does come from many varied sources. A “look back” to a certain kind of artistic classicism also seemed very appropriate, given the historic nature of Bruton Parish.

I have always taken great personal pleasure from the music of composers written with these Germanic neo-baroque styles influences. For me, it combines some of what I like most about baroque and Renaissance music with the harmonic language of the 20th century, including free modality, quartal/quintal harmonic structures, and modern polyphonic/contrapuntal writing. Although some of the music is infrequently performed today, numerous composers adapted these style elements in their own personal way including Hugo Distler, Paul Hindemith, Ernst Pepping, Harald Genzmer, Hans Friedrich Micheelsen, Hermann Schroeder, Helmut Bornefeld, Siegfried Reda, Hans Studer, Friedrich Zipp, Joseph Ahrens, Herbert Peter, Gerbert Mutter, Herbert Gadsch, Jan Bender, Gerhard Krapf, Harald Rohlig, and Lothar Graap, among others.

Concerto per organo is not intended as a style pastiche; it is a work written by an American in the early 21st century. So I have thus tried to explore elements from this style within my own idiom. While this influence is likely present in more subtle ways in various of my works, in this piece I have allowed it to come into the foreground.