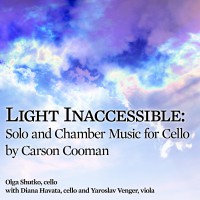 Recorded on Light Inaccessible: Solo and Chamber Music for Cello by Carson Cooman (2014)

Clausula III (2007) for solo cello was written for and is dedicated to Oliver Coates and Court Lane Music. The score is also inscribed in memory of American composer Andrew Imbrie (1921–2007).

The work is flexible and lyric—gradually expanding and contracting its basic musical material within a passionate discourse.