Carson Cooman has a particular interest in new contemporary repertoire for the often overlooked chamber organ. While many pieces from the Baroque and pre-Baroque eras can be played very effectively on small chamber instruments, and while there have been other pockets in organ music history with attention to repertoire for small organs (such as the many harmonium/choir organ pieces by French composers in the early 20th century), these organs have seen less attention in recent years outside of the performance of continuo parts.

The sort of organ imagined in this context is an instrument of a single manual (no pedals), with often just one, two, or three stops. These instruments exist in a variety of formats: including continuo/box/trunk organs (of great portability) as well as positive instruments that move less readily. 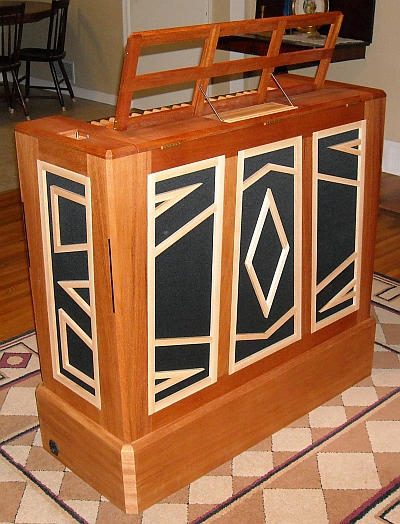 Carson has commissioned and premiered a number of new works that are designed for the chamber organ. While all the pieces can and have been performed effectively on any larger organ, they can be played on a chamber organ without musical compromise.

The works commissioned are intended to be at a variety of difficulty levels, ranging from very easy to fairly difficult. This is to promote use of this repertoire by a wide array of organists.

The list below contains new works commissioned as part of this ongoing endeavor.

Published by File Under Music

Published by Lorenz Publishing Co./The Sacred Music Press in “God of Grace and God of Glory”

Jim Dalton (USA)
…before the knowledge of the physical Grove spines fades (2017), with pedal